Charlotte Digregorio is an award-winning author, teacher, and poet in the traditional Japanese form of haiku.  Her poetry has been featured in such publications as Modern Haiku, frogpond, The University of Chicago Magazine, bottle rockets, and Shamrock Haiku Journal, and as Midwest Regional Coordinator of the Haiku Society of America, the Winnetka resident works tirelessly to promote haiku through workshops, conferences, and contests.  On May 7th, you can hear Ms. Digregorio speak about the history of haiku when EPL proudly hosts Haikufest from 1-5:30 p.m. in our 1st Floor Community Meeting Room.  Featuring a writing workshop, haiku contest, book signings, and additional talks by prolific haikuists and artists, Haikufest is a free, HSA-sponsored poetry event that promises to education and inspire haiku lovers both new and old.  To pre-register, simply contact Ms. Digregorio at (847) 881-2664 or EPL at (847) 448-8600.  In anticipation of Haikufest, we recently spoke with Ms. Digregorio via email where she shared some of her haiku and poetic inspirations, discussed her work with HSA, and previewed Haikufest’s exciting line-up of speakers.

Evanston Public Library:  How were you first introduced to haiku, and what do you most enjoy about the form?  Do you find other Japanese poetic forms equally rewarding?  Who are some of your favorite poets, and can you suggest any books for readers new to haiku?

Charlotte Digregorio:  I came across haiku by accident in the library in 1995.  I was trying to market some sestina, sonnets, and free verse that I’d written, so I was consulting Poet’s Market.  As I was paging through it, I ran across a listing for Modern Haiku journal.  I thought it sounded interesting, so I sent off for a sample copy.  In reading it, I was hooked.  Haiku seemed so beautiful and thoughtful, because it captures a moment in our lives.  I also write tanka, a Japanese form of five lines.  It’s lyrical, unlike haiku that is stated in a matter-of-fact way.  I prefer, however, the subtlety of haiku.

As far as haiku poets, I like Issa, one of the Japanese masters who lived from 1763-1827. His work is widely translated into English. For those who are just getting started in haiku, I’d recommend Bruce Ross’s How to Haiku: A Writer’s Guide to Haiku and Related Forms and Cor van den Heuval’s The Haiku Anthology.

EPL:  As a prolific writer of haiku, can you give us a window into your creative process?  Where do you find the inspiration for your poetry?  What do you find most challenging about writing haiku?

CD:  Inspiration is everywhere.  Often, late at night before I go to bed, I think about what happened during the day.  I often ask myself what the happiest moment of my day was, particularly if something didn’t go right. (I like to end my day on a positive note, no matter what happened.)  Sometimes, a haiku moment comes out of this, and I write about it. Further, when I’m driving or walking down the street, sometimes I spot a haiku moment. For example, in winter, after I see a homeless person on a street corner downtown, I observe him and I end up jotting down a thought, as I carry a notepad with me.  Later, I develop this into a haiku.

Haiku is challenging for me and for most haikuists in that it is difficult to say a lot in so few words.  After you write the haiku, you reduce your words to write it in the shortest possible way.  That’s a challenge!

EPL:  Of all the haiku you’ve written over the years, could you share the three poems of which you’re proudest?

CD:  I’ve published more than 250 haiku, so I chuckle as I write this.  I’m not sure I have any favorites as they are different, just like the moments in my life.  But, since you ask, I’ll give you three that I feel everyone can understand:

caught in the firing line
of the corner evangelist–
no salvation

EPL:  Could you tell us about the Haiku Society of America and its history?  How did you initially become involved with the group, and what are your main responsibilities as Midwest Regional Coordinator?  What are some of the ways in which HSA promotes haiku?

CD:  The Haiku Society of America was founded in 1968 to promote the writing and appreciation of haiku in English.  In 1995, after I discovered it, I joined.  Through the years, I’ve found it to be a powerhouse of information with interesting workshops, lectures, critique sessions, multi-day festivals and conferences, contests, and comprehensive publications about everything that is going on worldwide in haiku.  We have both beginning and experienced haikuists who grow in their abilities to write it as we network at local, regional, and national programs that it sponsors. 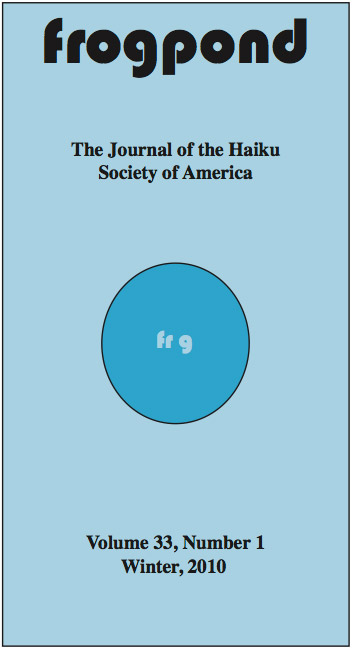 Of all the literary groups I’ve belonged to we are the most active.  And, we are very generous about sharing what we know as volunteers.  My main responsibilities as Midwest Regional Coordinator are varied.  I organize about five meetings a year including such activities as lectures with expert speakers and workshops with critique of attendees’ poems.  Last September, we held a three-day festival in Mineral Point, WI with poets coming from throughout the U.S. and Canada.  I learn so much from all the expert speakers and hands-on workshops.

I do tons of publicity all year long trying to spread the word about all of our wonderful activities.  I contact the media, schools, libraries, other literary organizations, and online blogs and web sites.  I also correspond regularly with members in our eight-state region, sharing information about publications and opportunities for getting published and winning awards.

Some members even send me a few haiku, once in a while, that they’ve written.  If they are stuck and need assistance, I try to help them patch up a haiku into publishable form for our members’ annual anthology.  My goal is to be encouraging.  Many poets aren’t very persistent, and they give up if it doesn’t come as fast as they’d like.

In addition, I mentor members in other states on how to start local haiku groups.  Further, I write for the HSA newsletter. And, because I’m Coordinator, I’m often asked to give workshops and lectures on haiku at schools and libraries.  Recently, I gave a workshop to Chicago Public School teachers co-sponsored by the Japanese Consulate.  I was asked to judge the Chicago Public Schools’ student haiku contest by the Japanese Consulate so I recruited other poets, too, as judges.  In May, I’ll be speaking on haiku at the Milwaukee Public Library.

As you can imagine, it’s a second job to me!

EPL:  On May 7th, EPL proudly hosts the HSA-sponsored poetry event Haikufest.  Could you give us a little program preview?  Who are your scheduled speakers, and could you tell us a bit about them?

CD:  First, I’ll speak on “Haiku: A Path Leading to Conservation Thought.” Actually, this will also be an overview of haiku–how it’s written, its history in Japan, the U.S., and worldwide. We will analyze various haiku so that attendees will experience what it is all about.

Second, Francine Banwarth, a longtime award-winning Iowa poet who has been an active leader with the HSA, will speak.  Her topic is: “A Writing Life in Seventeen Syllables or Less.”  She will give a fun and intriguing talk on what inspires her to write haiku, and her methods of writing with multi-layers of meaning.  Francine will also lead a group brainstorming exercise on writing a haiku on a certain theme.

Next, Dr. Randy Brooks, Dean of the College of Arts and Sciences at Millikan University and Professor of English, will speak on “The Role of Kukai in the Haiku Tradition.” Kukai is a haiku contest, and Randy will have us judge haiku that some attendees have submitted in advance of Haikufest.  Winners of the contest will receive issues of Modern Haiku journal.

Randy has published a haiku collection, School’s Out, and he and his wife Shirley Brooks publish the haiku magazine Mayfly.  They are poetry publishers of Brooks Books.

The last presentation will be “Haiga: History and Technique” by Lidia Rozmus.  Lidia is a haiku poet and artist who will discuss the art of haiku accompanied by ink paintings. She is exhibiting her Japanese art the entire month of May on the second floor of EPL to help us promote our event.  Lidia is a native of Poland and has authored and designed several books on Japanese poetry and haiga that have won HSA awards.  She has exhibited throughout the U.S., Japan, and Poland.

Finally, there will be individual help on writing a haiku.  Our speakers will be selling and signing their haiku books during break time while they chat with attendees.  They are a very friendly group of poets, and they love to meet others.

EPL:  Following Haikufest, what other 2011 poetry events does the HSA have planned both nationally and here in theMidwest?

CD:  The HSA holds multi-regional and national conferences throughout the U.S. every year.  There are always lectures and hands-on workshops given by haiku experts. Often, our members from abroad attend.

EPL:  What are your future writing goals?  Do you have any haiku or nonfiction projects currently in the works?

CD:  As a poet, I was recently nominated for a Pushcart Prize and have won nine poetry awards in various poetic forms.  Currently, I’m writing a how-to book on haiku and am also putting together my haiku collection.

I started out as a non-fiction writer.  I am an award-winning author of four non-fiction books, two of which have been Featured Writer’s Digest Book Club Selections.  They are: You Can Be a Columnist and Beginners’ Guide to Writing & Selling Quality Features.  These books have been adopted as supplemental texts for university classes along with my book Everything You Need to Know About Nursing Homes.  In 1995, I wrote a really fun book, Your Original Personal Ad.  It was an especially popular book at bookstores.  I have done many book signings since the 1980s when I became an author.

EPL:  What are some of your other reading and writing interests?  What was the best book you read last year?

CD:  I have advanced degrees in Italian and French Literatures, and I taught languages and writing at university level for most of my life.  When I read books, they are often literary classics, not so much the modern, popular books.  Last year, the best book I read was Eugenio Montale: Collected Poems 1920-1954.  Montale was an Italian poet who won a Nobel Prize in Literature.  He didn’t write haiku, but he inspires me to write all kinds of poetry.