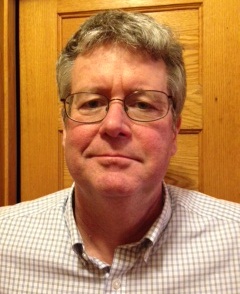 My name is Kevin Coughlin.  I moved to Evanston from St. Louis in 1974 to attend Northwestern and lived at the dormitory next to the Evanston library for 4 years.  I got as far away as about 3 miles – across from the 400 Theater in Rogers Park – with each subsequent move bringing me back closer to where I started (about 4 blocks from EPL the past 17 years).  I have worked in marketing research for 34 years with a nice side benefit being a train commute for many of those years – a great place to read.  My other main hobby is listening to books while I walk my dog, walk to the train, etc.

Magical, full of eccentric characters and life lessons, lots of humor and at least a few allusions to James Joyce. I can’t wait to read it again.

It took me 35 years to get past page 100 of Proust’s In Search of Lost Time and now thanks to the Evanston Library’s book group I’m more than halfway through the 4500 pages and 3 of the 7 volumes.  The writing in The Guermantes Way (Volume III) got better and better with characters from the past reappearing and lots of new ones coming on stage.  The writing does take getting used to.  Here’s a touch from early on in Guermantes from a soliloquy by Francoise, a servant of the narrator’s family who resents the family’s move from Combray to Paris: “Ah, Combray, when will I see you again, poor old place? When will I spend the whole blessed day among your hawthorns, under our own poor lilac trees, hearing the finches sing and the Vivonne making a little noise like someone whispering, instead of that wretched bell from our young master, who can never stay still for half an hour on end without having me run the length of that confounded corridor. And then he makes out I don’t come quick

enough; you’d need to hear the bell before he rung it, and if you’re a minute late, he flies into the most horrible rage. Ah, poor Combray!”

I liked Black Cadillac – Roseanne Cash’s album reacting to her parents’ deaths – and found this autobiography quite touching.

4) Destiny of the Republic: A Tale of Madness, Medicine and the Murder of a President by Candice Millard (2012)

There was so much I didn’t know about James Garfield, how political conventions were run, the history of medicine, the patronage system, Alexander Graham Bell.  Quite wonderful.

5) Damned to Fame: The Life of Samuel Beckett by James Knowlson (1996)

At last a literary hero of mine who turns out often to be kind and humble, as opposed to Joyce, Hemingway or Salinger.  This quote from Beckett regards Joyce but I’m guessing he would also apply it to Proust (another of his heroes): “I realized that Joyce had gone as far as one could in the direction of knowing more, being in control of one’s material.  He was always adding to it; you only have to look at his proofs to see that. I realized my own way was in impoverishment, in lack of knowledge and in taking away, in subtracting rather than in adding.”