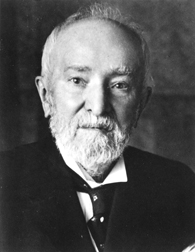 When last mentioned on this blog, Mr. Grey was the man responsible for donating the painting that is no longer a painting on the third floor.  A businessman and philanthropist, he lived from  1830-1925.  He was also an Evanston resident and quite generous to the Evanston Library in various ways.

In the book History of Northwestern University and Evanston, edited by Robert Dickenson Sheppard and Harvey Bostwick Hurd (published in 1906), we learn that in 1884 the library was in a bad way.  It was small.  It was cramped.  It wasn’t really a proper library.  Somebody needed to step in and provide the town with the kind of library building Evanston deserved.  That somebody was Mr. Grey.  In 1897 he attempted to offer Evanston $10,000 towards a $100,00 building.  There was some interest and so the Library Board tried to secure a good site for the new library location.  Unfortunately they thought it would be neat to abut the City Park.  The property owners of said park, however, did not care for the idea.  No matter.  In January of 1900, Grey upped his game.  He offered to give $100,000 for a library building, “provided a site should be furnished, cleared of buildings, free of cost or incumbrance, and the premises after purchase removed from the tax list.”  Seems reasonable.  So the Library Board looked for a property that would fit the bill.  And just as they thought they’d secured the right spot, the property was instead sold to the Christian Science Church.

There was still hope.  In April of 1901 a State law had passed that gave cities the power to levy a tax for the purpose of purchasing sites for public library buildings.  So, the Board found a site, figured it would cost $45,000, and were determined to spread the cost over a period of fifteen years.  And it would have worked too, had it not been for the fact that the City of Evanston was already indebted “to its full legal limit” already.

So did Mr. Grey give his $100,000?  Nope.  By 1902 the library board and city gave up all attempts to secure a site for the library. They essentially lost the Grey gift.  Instead it was Andrew Carnegie who provided $50,000 toward the cost of the original building, supplemented by a bond issue of $31,600 for the cost of the site and $25,000 towards the cost of the building.  In June of 1904, the City found a place to put the library.  The corner of Orrington Avenue and Church Street was purchased for the low low price of $31,600.00.

There is one nice thing to come out of this story.  Go to the corner of Orrington and Church today and what do you see?  A lovely library, precisely where it was over a hundred years ago.  Not the same building by any means, but still a place for people to come, read, or get information of every possible sort.