The other day I was looking at the city’s website and ran across this fascinating article: Former Negro League Player Ray Knox Receives Key to the City.

Turns out, we’ve had an honest-to-goodness Negro League baseball player here in Evanston for decades and yet only a few of us knew about him.  As the piece explains, “The Negro Leagues were formed in 1920 in response to Jim Crow laws that banned black players from competing with white teams. This league slowly faded after Jackie Robinson broke the baseball color barrier by playing for the Brooklyn Dodgers in 1945.”

Mr. Knox is also one of the few dozen Negro League players still alive today.  In celebration, here are some books that honor the Negro Leagues in the best possible way.  Put a couple on hold today:

We begin with some hometown pride. The description of the book reads, “In 1886, a semi-pro team known as the Union Baseball Club was founded in Chicago. Made up of black players under the leadership of Frank Leland, this team worked its way to the top of Chicago’s semi-pro city league, an organization which otherwise included only white teams . . . Covering the years 1870-1953, this heavily researched history includes a detailed account of one of the Negro Leagues’ most legendary teams. A comprehensive biographical dictionary and detailed game log are included.”  Place the book on hold here.

A cohesive history of Chicago’s long relationship with black baseball.  If you’ve never heard of the West Baden Sprudels or the Zulu Cannibal Giants, now you can correct a great wrong.  Place the book on hold here.

A broader overview of baseball in Chicago as a whole, historically.  Contains information on everything from The Negro Leagues to the major leagues, to the little leagues.  Fairly comprehensive.  Place the book on hold here.

Though ostensibly written with a younger audience in mind, Kadir Nelson’s paean to Negro Leagues baseball is without a doubt the most beautiful book you’re likely to encounter on the subject.  With infinite care Nelson tells the story of Negro League baseball from its beginnings in the 1920s through the decline after Jackie Robinson crossed over to the majors in 1947.  The oil paintings alone are worth the price of admission.  Place the book on hold here.

She was called “the female Jackie Robinson” and in this crazycool memoir you’ll learn how one young woman went from ragtag teams barnstorming across the Dakotas to playing in front of large crowds at Yankee Stadium itself.  When she was 32 she laid claim to the second base position recently ceded by Hank Aaron, who had moved on to the majors.  And that’s just the beginning . . . .  Place the book on hold here. 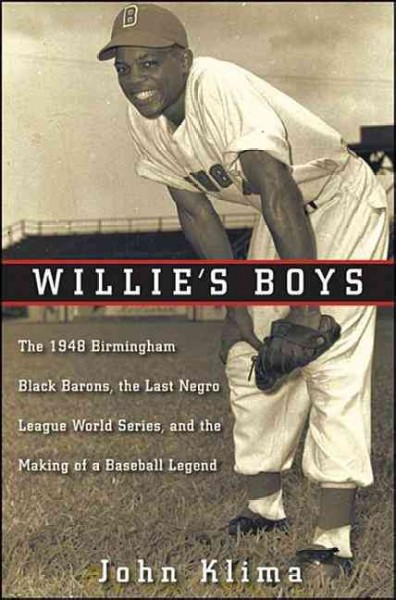 When was the last Negro League World Series and how was Willie Mays involved?  Here author John Klima takes a close look at Willie’s service with the 1948 Birmingham Black Barons and shines a light on the early professional years of this baseball great.  Place the book on hold here.

Actor Paul Winfield narrates this Negro Leagues Baseball documentary.  Josh Gibson gets his due and viewers even get to see an interview with Satchel Paige himself.  When Library Journal reviewed this film their sole objection was that it was just 30 minutes.  We need more!  Place the DVD on hold here.

You’ve never heard of The Bingo Long Traveling All-Stars & Motor Kings???  Then you are missing out!  Technically this film has more to do with the barnstormers of the 1930s but look at that cast.  James Earl Jones.  Billy Dee Williams.  Even Richard Pryor!  I’ve actually seen this movie and I’m telling you, it is a hoot.  You are missing out if you haven’t witnessed it firsthand.  Place the DVD on hold here.